Two summers ago, I had the pleasure of working with an assistant director who introduced me to a little phrase that would change the way that I looked at acting. 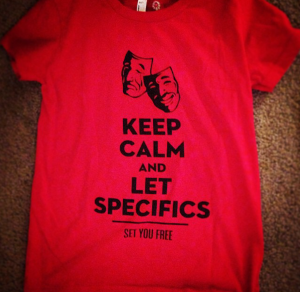 It’s something that one of her college professors would tell them in class.  We soon adopted it into our daily mantra, and it took us through our 4 weeks of summer acting camp.  As I began using the phrase more and more in my daily work, it opened up my eyes to the power of language and details.

So what does it mean anyway?  Simply put: the clearer your choice, the easier it will be to do the rest of your work.  This is true not just in theatre, but in daily life as well.  Think of the business world.  If I am starting a business, I want to make sure that my company has a clear mission statement and identity.  The clearer I am with those choices, the easier it will be to sell my product.  It’s hard to market something that is nebulous.  A similar perspective can be taken on workplace communication.  The most problems come up through misunderstandings.  Be specific about what you need and want in order to achieve your goals.  Sending a clear message means that everyone is on the same page and that your work will flow more easily. 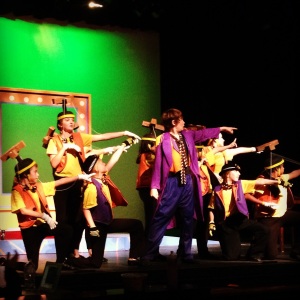 Theatre presents us with the strange task of getting up on stage in front of an audience and then acting naturally.  It’s amazing how many times I’ve given the note, “Just walk normally.”  As soon as we stand up on stage and starting “acting,” we somehow forget how just just BE.  A director gives you movement and stage direction, which you are then expected to embody in an organic and normal way.  It can quickly become incredibly stilted and awkward.  Enter specifics and details to save the day!

It starts with the basic actor questions: Who am I?  What do I want?  What is in the way of getting what I want?

Answer these questions as fully as you possibly can based on the clues you gather from the script and your own creative imagining of the character. The more specifically you can answer these questions, the easier it will become to embody the character, rather than feeling like it’s something that’s being put upon you.  Once you know who you are and what you want, then you can start going after it.  Take action.  This may sound obvious, but it is important to ACTUALLY DO things when you are on stage.  If the stage directions say that you whisper something in other character’s ear, actually whisper the words you think your character would be saying.  Don’t just go “psst psst psst.”  See things as they occur in the moment.  We rehearse plays for many weeks before they open, so of course all the actors know where the villain is going to enter, or when magic is going to occur.  It is important, however, to behave as if it is all really happening for the very first time.  Think.  How would you react if you suddenly saw a ghost, or your long lost love arrived, or you heard a gunshot?  Decide what you would do in that moment.  Be exact.  Once you are given blocking or choreography, hit your marks exactly every single time you do it.  Once when I was in a show, we had an understudy go on for one of the ensemble members.  It didn’t seem like a big deal since she didn’t have a huge role in the show, and I didn’t interact with her very much on stage.  However, in one very intensely charged scene, my character was supposed to run into her on the street, get scared, and then turn around.  We had rehearsed and performed the moment dozens of time at this point.  The night that the understudy went on, she stood slightly upstage of where the regular actress usually was when I ran into her.  It wasn’t a huge deal, but it did momentarily shake me.  For a second, I became present on stage and had to problem solve how to get around her.  It took me out of my character and the momentum I had generated in the scene.  I hadn’t even realized how much I depended upon and expected that actress to be in the exact same spot every single night.  Mind you, we are talking about the difference of a foot at most. 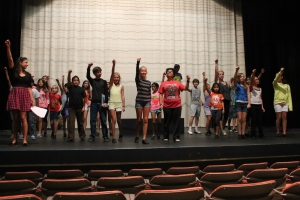 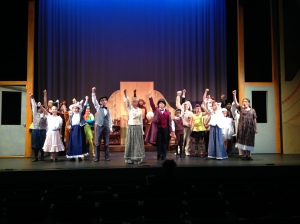 The details matter.  They matter very much. They are what separate something acceptable from something great.  This year, I introduced the concept of Specifics Set You Free to the teenagers I work with, and they have completely embraced the concept.  It informs all of our work as a company.  It makes me a better director, it makes them clearer actors, and it makes our work as collaborators even stronger.  Being teenagers, they have also created a hashtag to accompany all of their Instagram pictures.  I love that they have accepted this as our mantra.  I see it in their growth as actors and as young adults.  I see it in the clarity they develop from rehearsal to performance.

We’ve all heard the famous quote “God is in the details.”  I don’t know about God, but I do know that I see miracles occur every time one of my young actors is brave enough to get up on stage and tell a clear, inspired story to a room full of people.

Rachel Robinson is a teaching artist, director, music director and performer based in San Francisco. She is a graduate of New York University’s Steinhardt School, and holds a degree in Vocal Performance. In addition to her work as a singer/actress, Rachel maintains a very busy schedule directing, music directing, and teaching. Rachel grew up in the Washington, D.C. area where she became an active performer at a very early age. She appeared many times with The Washington Opera, and she also played roles at the Adventure Theatre and with the Washington Savoyards. In 2003, Rachel moved to New York City to begin her degree at New York University. During the next four years Rachel appeared in many cabarets and productions, both at NYU and in the city. After graduating in May 2007, Rachel became the resident Music Director at Stage Left Children’s Theater in Tappan, NY. She was in residence there for three seasons. At the same time, she founded a private voice and piano studio. In September 2010, Rachel relocated to San Francisco. She began working as a music instructor at ViBO Music, Village Music School, and the San Francisco Friends School. She also was brought on as a music director at the Willows Theatre Company. In 2011-2012, Rachel spent a year as the Conservatory Director at the Willows, where she worked on developing opportunities for youth and up-and-coming theatre artists. No matter what level of student she is working with, Rachel believes in finding the student's "natural voice." Playing any instrument is a process, not an event, and her goal is to make that process as fun, productive, and insightful as possible. View more posts

One thought on “#specificssetyoufree”