Music truly is all around us.  It’s in a Robin’s song, the rustling of leaves, and waves crashing against the shore.  But how often do we actually stop to hear the sounds of the world around us?

My running team only has a few rules: No strollers, no pets, no wimps, and no earbuds.  At the beginning of the season, some people were astonished at the requirement of leaving the headphones at home.  “How can I run without music?” someone asked.  There are many reasons for this rule.  First, part of the point of the team is social.  We should be building camaraderie and community.  We are encouraged to talk to our teammates on runs, rather than being isolated in our own musical world.  And, of course, there is the safety factor.  If you have earbuds in, how are you going to hear an approaching car, a passing cyclist calling out, or another person approaching?  It is important to be aware of your surroundings, especially if you’re out running alone.  Some people claim that they need to listen to music while running in order to establish a rhythm or pace.  Indeed, there are many apps that you can set to play songs that keep a certain tempo so that you are guaranteed to be moving at a certain number of BPMs.  Our coach would stress, though, that your own internal rhythm is more important. The first thing we learned at the beginning of the season was how to breathe.  Now, when I run, I focus on the rhythm of my breaths.  I hear my breath coincide with every two footfalls.  That’s the only cadence with which I am concerned.  If I get tired or bored, I can also always focus on world around me.  I’m fortunate enough to live in an impossibly beautiful part of the country, so every run usually also includes amazing scenery.  There’s so much to see and hear.  Who needs earbuds?

I’m on vacation this week, and this morning I decided to get up early and go down 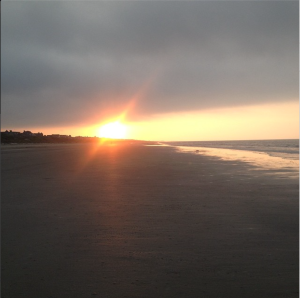 to the beach to watch the sunrise.  There were a few other people on the beach at 6:15am, but for the most part it was me, the surf, and the birds.  It was an important moment of oneness.  At first it seemed so quiet in comparison to the midday beach crowds.  But as I rode my bike along the shoreline, I became aware of just how many different sounds I was hearing.  The rushing of the waves as they rolled toward the shore; the wind blowing past me; seagulls crying and birds chirping; shoes crunching on the sand; my bicycle cruising along the beach; leaves blowing in the wind; squirrels and other critters playing in the dunes; bugs calling to each other; cars on a nearby road; an army helicopter flying up above; my own breath.  The natural world creates a veritable symphony of sound. It’s no wonder that composers have been creating pieces of music based on the sounds of the earth for hundreds of years.  Take Aaron Copland’s Appalachian Spring:

These two pieces, written hundreds of years apart, one by an American and one by an Italian, both expertly evoke a natural setting.  Whether it’s the sun rising over the mountains, or the changing of the seasons, the two pieces somehow find a way to create an aesthetic that makes the listener feel as if he is actually seeing these things.

On Wednesday, I spent the morning volunteering on a project for Habitat for Humanity.  Out of sheer coincidence, the woman who I was partnered up to work with turned out to be an audiologist.  We had a fascinating conversation about

music, sound, and hearing.  One of the most poignant parts of our discussion had to do with cochlear implants.  According to the National Institute on Deafness and Other Communication Disorders, “A cochlear implant is a small, complex electronic device that can help to provide a sense of sound to a person who is profoundly deaf or severely hard-of-hearing . . . Cochlear implants bypass damaged portions of the ear and directly stimulate the auditory nerve. Signals generated by the implant are sent by way of the auditory nerve to the brain, which recognizes the signals as sound.” I shared with her the story that my college ASL professor had told us about the day she got her cochlear implant.  She said that when she came out of surgery and they first turn on the device, she just burst into tears.  She had never heard before in her life, and suddenly there was so much.  My teacher also told us that even now she would sometimes remove the external part of the device and return to silence because all the sound could be too overwhelming.  Susie, my new audiologist friend, told me that she runs into this with patients all the time.  Young children are the best candidates for the implants because their brains are still developing and they an easily learn to differentiate sounds as any hearing person would.  The older you are, the harder it is to learn to pick out the important sounds and ignore the rest.  In that sense, the person getting the cochlear implant is starting from scratch as if he or she was a baby first learning to hear and speak.  We don’t realize how many sounds we are processing at a given moment.  With 28 years of practice, I am able to have a conversation with a friend in the middle of a loud restaurant because my brain and auditory nerves know how to focus on the tone of my friend’s voice and ignore the sounds of music, clanking dishes, and other chatter.  Lately, after living across from a construction site for almost a year, I’ve become remarkably good at blocking out the sounds of hammering at 7am when I want those last few precious minutes of sleep.  Those of us who are musicians have an ever finer tuned ear.  With practice and training, we are able to pick out a choral harmony line to sing, or identify the oboe line of a symphony.

A few weeks ago, I had the pleasure of seeing Nina Raine’s play “Tribes” at Berkeley Repertory Theatre.  The protagonist is the only deaf child in an otherwise hearing

family.  His family didn’t want him to been seen as someone “handicapped,” and so they taught him to read lips and speak, and her never learned sign.  As an adult, he meets a young woman who grew up hearing in an otherwise deaf family, but is now losing her hearing and is struggling to come to terms with it.  He claims that she is the lucky one because she at least had some time to experience the entire loud, audible world.  She, on the other hand, avers that he’s the lucky one because he doesn’t know what he’s missing.

I find ASL to be a profound and effective language.  In fact, sometimes it is a much more direct form of communication than speech.  It is extremely beautiful and artistic.  The language also comes with its own vibrant culture.  I know that there are some deaf families that choose not to give their deaf children hearing aids or cochlear implants.  At the end of the day, I personally disagree with that choice.  I understand the cultural and familial value of the deaf world, but on a day like today when the world is simply abuzz with music and sound, how could anyone want to deny a child the opportunity to experience such a wonder?

We live in a loud and wonderful world.  Most of us are fortunate enough to have the ability to hear its every nuance and song.  So take out your earbuds and listen up!

Rachel Robinson is a teaching artist, director, music director and performer based in San Francisco. She is a graduate of New York University’s Steinhardt School, and holds a degree in Vocal Performance. In addition to her work as a singer/actress, Rachel maintains a very busy schedule directing, music directing, and teaching. Rachel grew up in the Washington, D.C. area where she became an active performer at a very early age. She appeared many times with The Washington Opera, and she also played roles at the Adventure Theatre and with the Washington Savoyards. In 2003, Rachel moved to New York City to begin her degree at New York University. During the next four years Rachel appeared in many cabarets and productions, both at NYU and in the city. After graduating in May 2007, Rachel became the resident Music Director at Stage Left Children’s Theater in Tappan, NY. She was in residence there for three seasons. At the same time, she founded a private voice and piano studio. In September 2010, Rachel relocated to San Francisco. She began working as a music instructor at ViBO Music, Village Music School, and the San Francisco Friends School. She also was brought on as a music director at the Willows Theatre Company. In 2011-2012, Rachel spent a year as the Conservatory Director at the Willows, where she worked on developing opportunities for youth and up-and-coming theatre artists. No matter what level of student she is working with, Rachel believes in finding the student's "natural voice." Playing any instrument is a process, not an event, and her goal is to make that process as fun, productive, and insightful as possible. View more posts